laser Energy As A Healing Tool

Robin Horton demonstrates the healing capacity of denta lasers, via a case study where a young patient faced surgery to resolve a cyst. 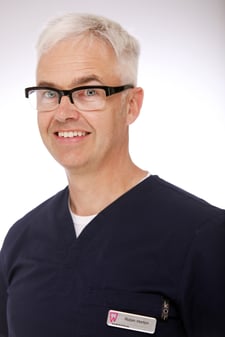 Robin is the owner of and principal dentist at Wayside Dental Practice in Harpenden, Hertfordshire.

After qualifying in 1990 he worked in general practice and also as an SHO in the oral surgery department of Bedford Hospital.

Robin has always been interested in technological advances in dentistry and he was one of the first dentists in the UK to practice laser dentistry, (starting with diodes in 2001).

He currently uses diode and erbium lasers on a daily basis and always in implant surgery. He is a member of the Academy for Laser Dentistry and has lectured in the UK and abroad on both lasers and guided implant surgery.

One of the many fascinating (and useful) things about lasers is their healing capacity. As dentists we like to be doing something, injecting, chopping, cutting, drilling or extracting. We find it very hard to sit back and reflect and allow things to resolve. One of my favourite sayings (which my poor nurses hear ad nauseam) is, ‘Don’t just do something, stand there!’ We can’t see the healing effect, it is happening at the cellular level. Because we can’t see it happen, we only see the effect later, we have to trust in protocols to use it correctly.

Over the time I have been using lasers the treatment protocols have changed as more research work is done to find out how to best harness this incredibly powerful tool. The following case study shows how laser healing energy completely changed the treatment plan and the long-term prognosis for this young man’s three affected teeth. This case is from eight years ago. 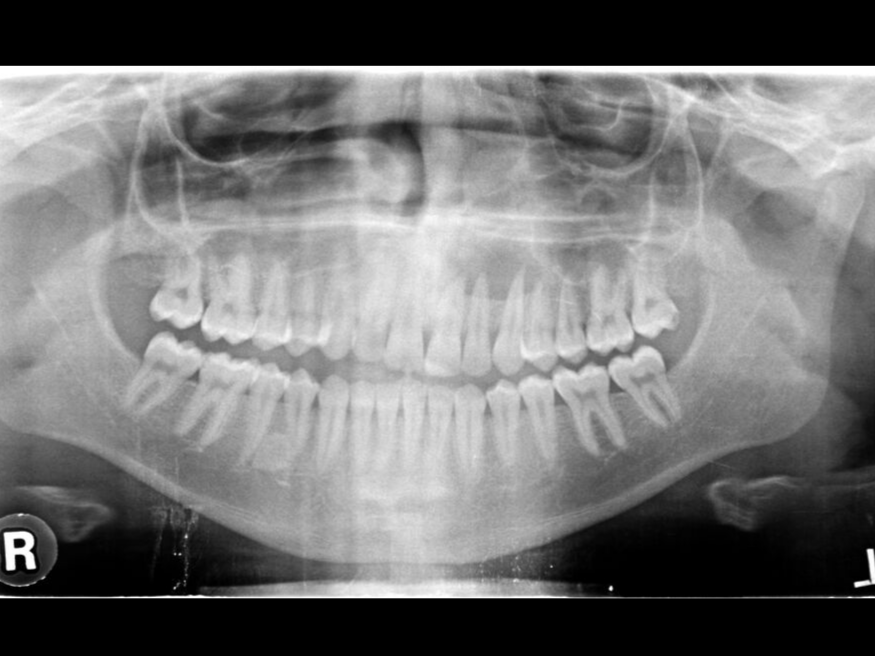 Figure 1: The OPG shows the cyst extent within the bone, from UL1 to UL4 (the more eagle eyed will also see an odontome by LR4 root) 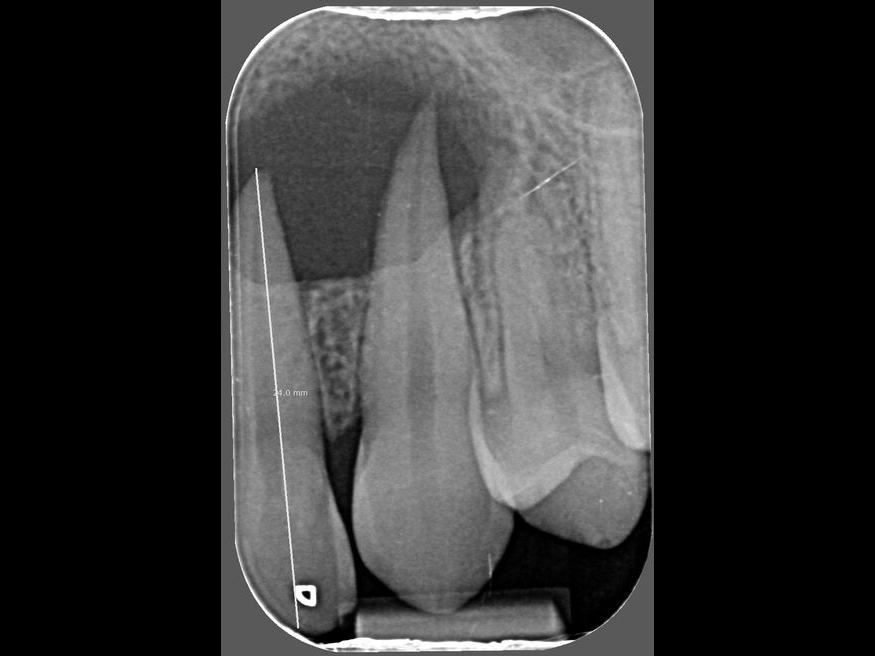 Figure 2: Shows the extent of bony destruction past the UL3 root, and the sheer size of the cyst 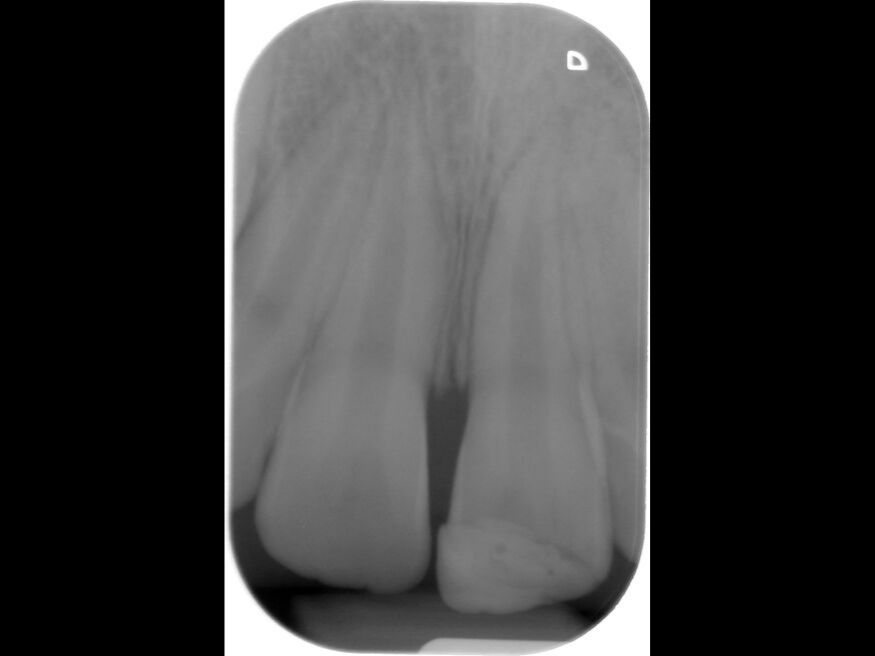 Figure 3: Pre-infection film from one year previously, two years after initial injury. Slight apical widening on both the central incisors.

Figure 4: Shows a master point film, and again shows the extent of the cyst.

A fourteen-year-old boy presented with a huge buccal swelling under his upper lip from midline to left premolar region, his left eye was closed by the swelling. He has epilepsy which wasn’t well controlled, and he was at boarding school, (leading to less frequent attendance than would be ideal), he was on antibiotics prescribed by his GP near the school, he had been unwell for the last month and was having more fits than usual for him. He was still playing rugby too.

The UL1 had lost an incisal corner after a previous epileptic fit and was restored with composite. This had happened some three years previously and previous radiographs had showed no issue. The lateral incisor has a small dens indente too. We opened up the UL1 and UL2 at that first presentation and pus drained freely from the two teeth. I also referred him for an urgent oral surgery opinion. We used a 940nm laser with a healing tip at 2w for two mins (240J) to put some laser energy into the system and help to reduce the pain and swelling. The maxillofacial surgeon was someone I had worked with in the past, who has sadly passed away. He advised me to root treat the three teeth and then refer the young lad back for surgery to remove/repair the cyst.

I saw the patient again a few days after initial presentation and opened up the canine too, which was non vital and I used a dual wavelength technique to clean the canals and then dressed them with nonsetting calcium hydroxide paste. The dual wavelength technique uses an erbium laser first (in this case a Biolase Waterlase MD) In this case I knew I had patency from the draining pus, we used an irrigant, (Sterilox) in the pulp chamber and a radial firing periotip (RFPT5) held within the irrigant (the irrigant being introduced slowly) The RFPT5 at 0.75w no air, no water, introduces a vortex-like effect and drags tissue and anything else out of the root canal. I then prepared the canals in the three teeth with Profiles to working length, repeated the Radial firing tip to remove any debris, dried the canals with paper points and then used a diode laser ( in this case an Ezlase( Biolase) 940nm laser with endo tip) on the perio pocket/endo setting, placed as deeply as it will fit into the canal and removing radially 1mm per second, four times, being careful not to initiate the tip. I then dressed all three canals with the nonsetting calcium hydroxide paste. Finishing with a healing tip and 1w for one minute (60j) over the site.

I repeated this a month later at which point the UL2 and UL3 were clean and dry and the film showed evidence of bony infill starting within the cyst volume, so I finished the root treatments on these two teeth. The cyst appeared to be getting smaller, the young lad’s swelling went down very rapidly after the first opening and draining. We were using a healing (bleaching) tip on the diode laser at 1w for one minute (60J) at each review. 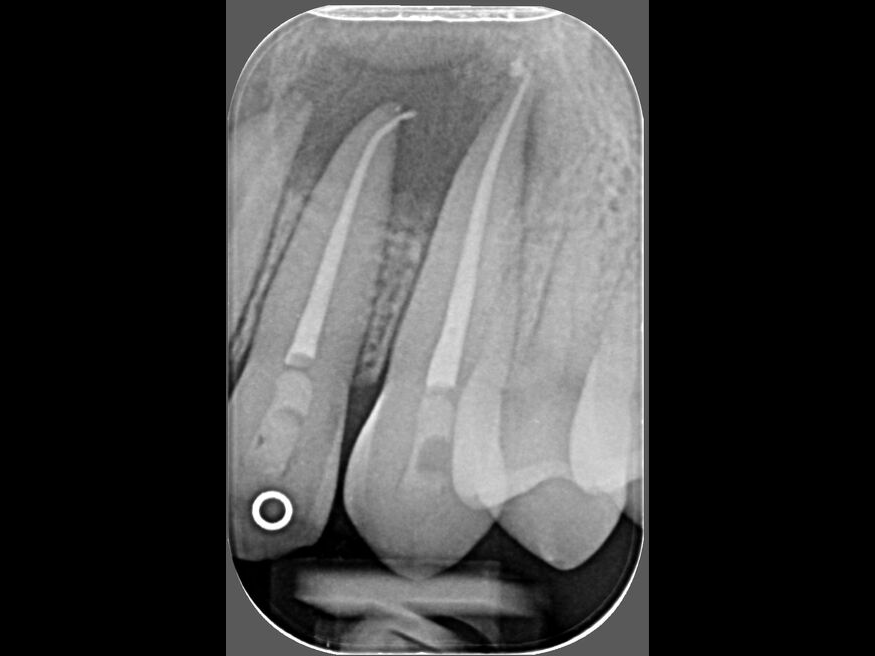 Four months later the cyst seems to be closing nicely with bony infill. At each dressing appointment we do the same dual wavelength technique and redress with Hypo-Cal and use the healing wand at the end.

We had postponed his oral surgery appointment as he wasn’t especially keen on an operation and things were going well. Another four months and we had resolution and I filled the last canal (overfilled too, annoyingly). Figure 9 shows the eight-year review, no symptoms, no surgery required, and no sign of recurrence. Thankfully he has since given up rugby and seems to have his epilepsy under control. 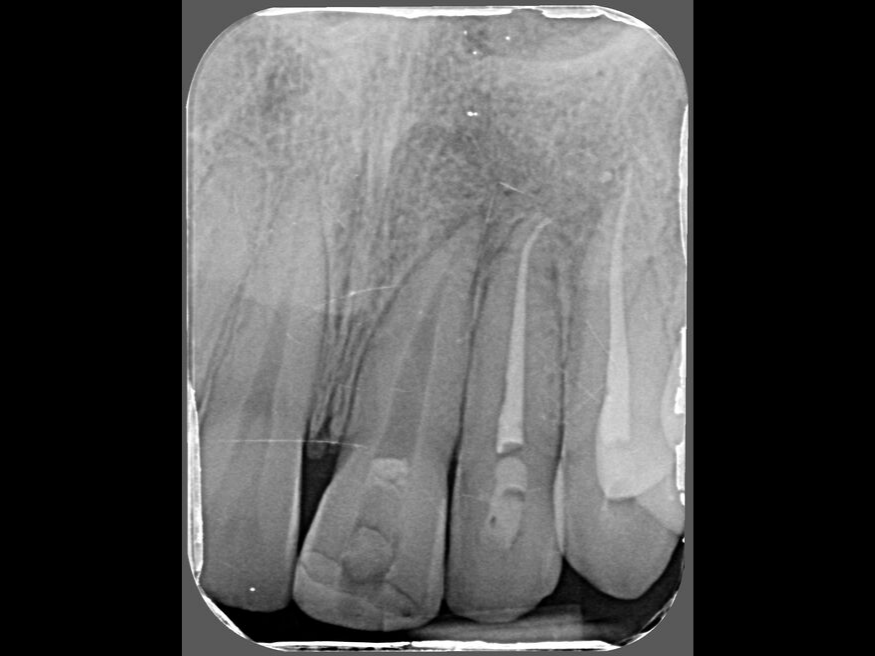 Figure 7: Complete resolution of the cyst. 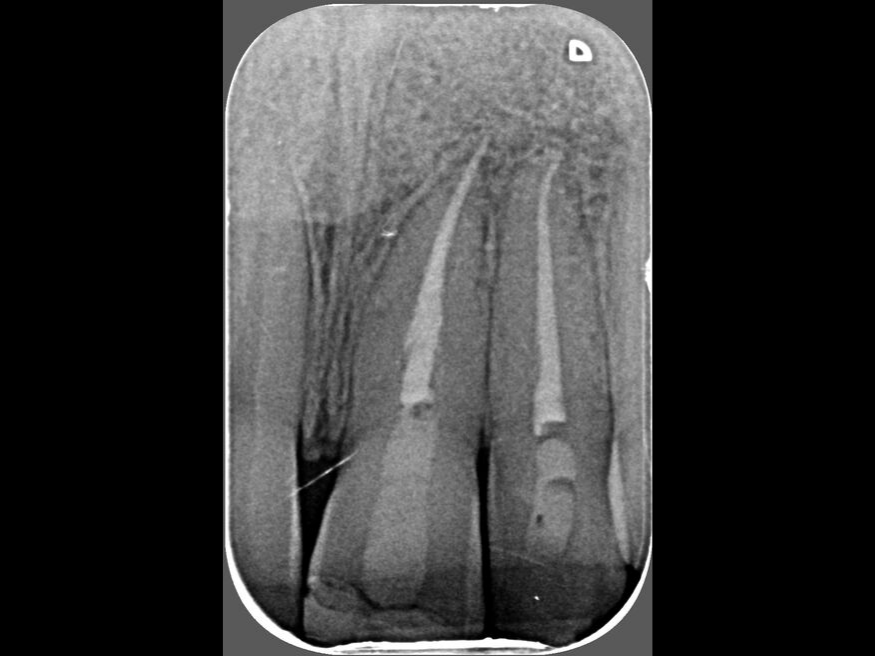 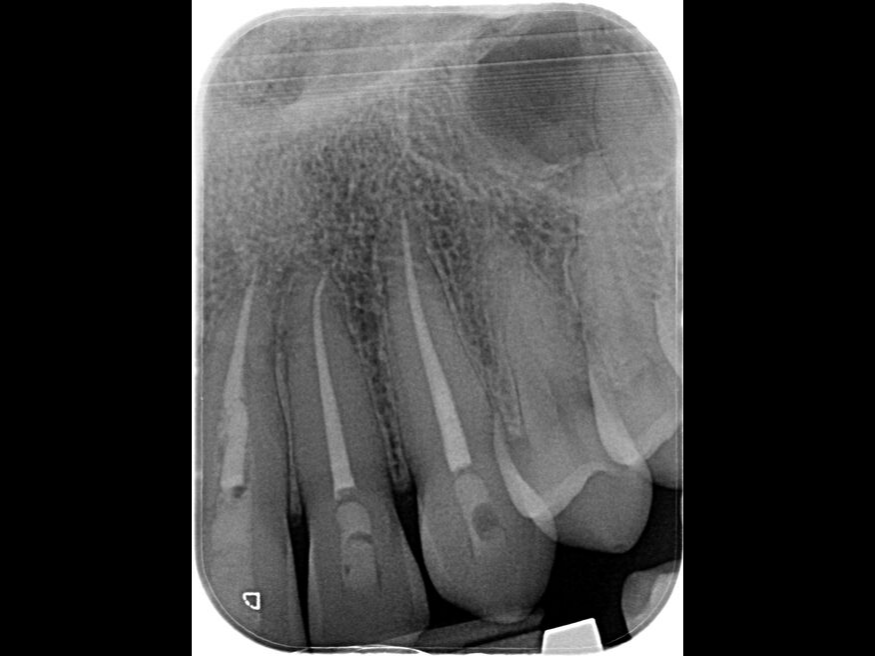 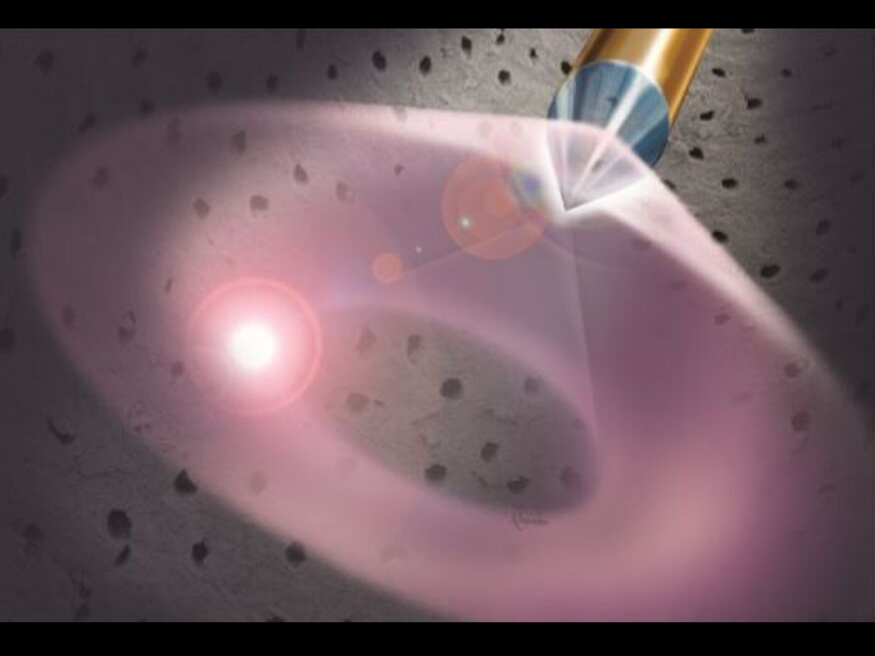 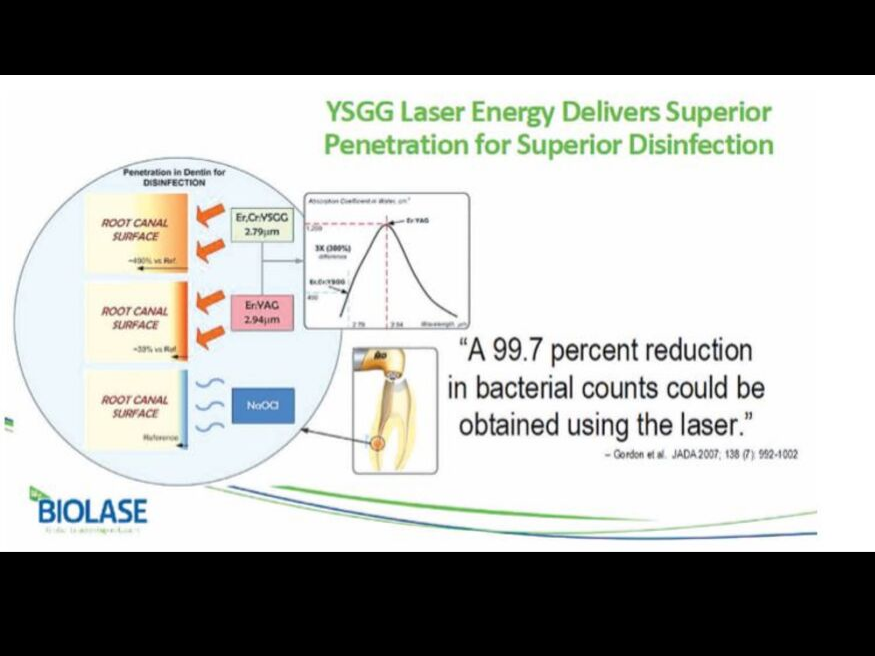 We used two laser functions here, healing action of laser energy probably being the most dramatic and the operative power in cleaning the root canals. I use lasers in endodontics routinely as an adjunct to my mechanical preparation. Studies show that the radial firing tips remove the smear layer more effectively than conventional methods. Laser use enhances EDTA action on the smear layer, and also the irrigants by warming and agitating the fluids. Lasers can disinfect by both photothermal and photodynamic processes, reaching areas that are hard or impossible to reach with conventional methods. Using conventional treatments supported by lasers will help achieve the goals of three-dimensional cleaning and disinfection of the root canal system (Tables 1-2). The healing effect is called photobiomodulation therapy (PBM) (Tables 1-2).

This is most effective from diode lasers (near infrared lasers) and it works on the mitochondria inside the cells, effectively
activating a whole host of cellular processes, encouraging healing of damaged cells in the area and inducing migration of the body’s healing cells into the damaged area. We also see enhanced inflammatory resolution and increased lymphatic drainage. Photobiomodulation has almost no contraindications, it is a non-invasive therapy. It is bactericidal, anti-inflammatory, analgesic and bio-stimulating. Indeed in 2018 NICE endorsed its use in preventing and treating mucositis caused by chemo or radiotherapy. PBM is an ideal starting point for a dentist or dental auxillary to get onto their laser journey. Diode lasers are relatively inexpensive and have a multitude of uses 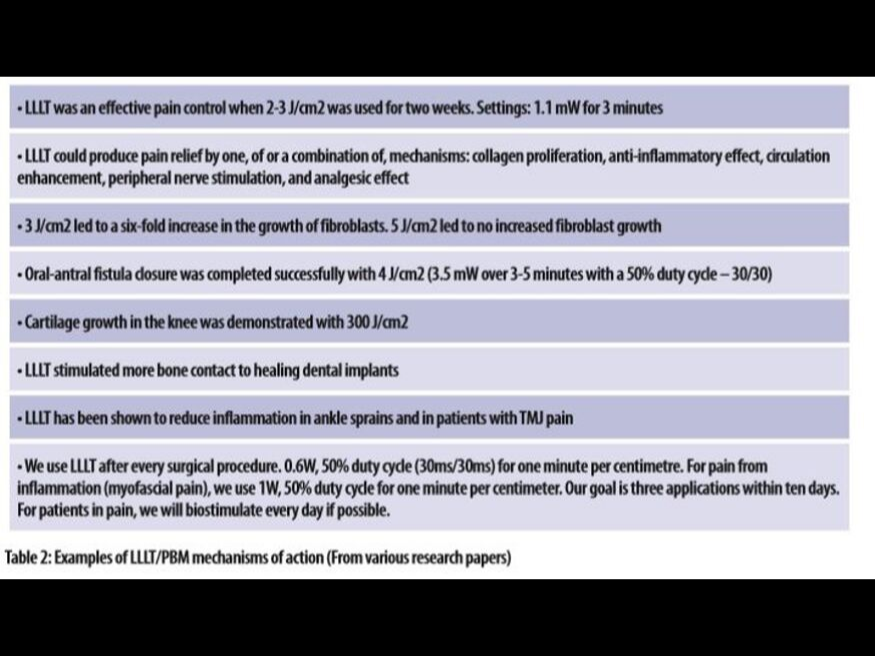 When I saw this patient my first thought was that I had to get drainage straight away and that he would need surgery later. I had already been routinely using laser for a long time by then and without even thinking about the PBM effect I just prepared the canals and treated the damaged area as I would always do. It can’t do any harm using lasers provided that you have proper training.

Surgery does work but at what cost? Three apicected teeth on a 14-year-old boy will last less long than three root-filled teeth I would guess. Join the revolution, isn’t it time you saw the light?