the History Of Dental Veneers

Originally created for an actor in 1928, dental veneers are now an integral part dentistry today. This blog takes a deeper dive into how veneers have become such an effective tool in many dental practices in the modern era.

Dental veneers were first developed by Californian dentist Charles Pincus in 1928 to change an actor’s appearance in a film shoot. Unfortunately, even though he continued to develop his idea through the 30's, he lacked a cement or bond that would hold them in place for any reasonable length of time.

It was only with the development of enamel etching by Dr Michael Buonocore in 1959 and of porcelain with hydrofluoric acid by Simonsen and Calamia in 1982 (Calamia, 1989) that porcelain was shown to bond predictably to tooth with composite resins.

Porcelain veneers are a part of ‘everyday dentistry’ and though debates have been made about the preparation or even ‘no preparation’ of the teeth, they remain a less destructive alternative to crowns.

However, that does not mean that they can be used in all cases where crowns are indicated, but are instead used on fractured, discoloured or malpositioned tooth, or where there is a need to alter their shape or size.

Prudent use may negate the need for orthodontics and can hide the black triangles associated with gingival recession. They are also one of the most abused cosmetic treatments used in dentistry today. Alternative and less invasive treatments such as whitening or orthodontic treatment must always be considered (Christensen, 2006).

The age of the patient should be taken into account too, as veneers do not have an indefinite life and therefore require replacement. The lifespan of porcelain veneers is hugely variable but one study showed only a 53% survival over 11 years. (Burke, Lucarotti, 2009). 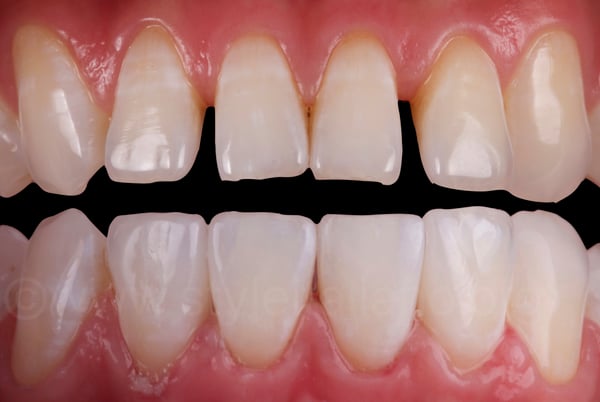 Before and after image courtesey of StyleItaliano Diastema closure with no-prep partial porcelain veneers case study, click to read.

Bonding to enamel, and especially to dentine surfaces, has dramatically improved since veneers were first introduced and the use of silanes has further increased the retention of these restorations.

Ceramic technology has equally progressed and so the physical properties have improved, meaning stronger and thinner veneers are possible.

Though some of the first veneers fabricated in the 1930s were made of acrylic, the use of composite resins – most commonly performed as a direct technique – have usually been considered as the poor relation of porcelain. They may be used as a provisional or temporary solution but are rarely considered as a definitive treatment. This may be attributed to an increased likelihood to stain, discolour, chip, fracture and wear more readily than porcelain.

Laboratory-made composite veneers are considered inferior and rarely used as a definitive treatment. However, composite development has improved considerably in recent years with a decrease in staining issues or deterioration in the aesthetics. Dentine and enamel composites are now produced by most of the major manufacturers, and layering techniques have advanced to such an extent that aesthetic results can easily match that of porcelain. 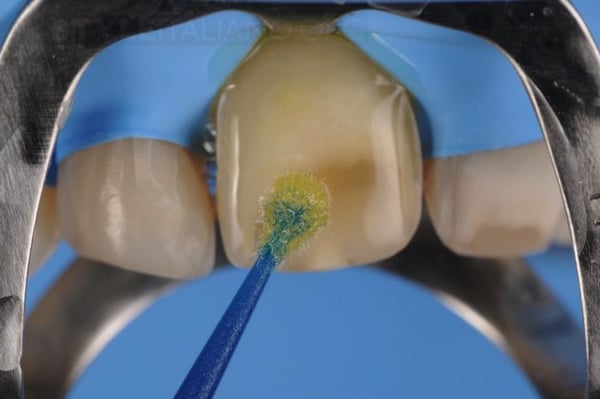 Direct composite veneers can be artistically challenging to perform. Obtaining good aesthetic results requires considerable time to be spent on finishing and polishing. It is difficult to gauge the thickness of the enamel and dentine composite layers to match that of the natural tooth.

Direct composite techniques also have major advantages, including a minimally invasive procedure and no laboratory involvement with resultant economic implications. Unlike porcelain, it can be easily repaired or renewed. In addition, only one visit is necessary, compared to two visits for porcelain veneers.

Unfortunately, performing these restorations to a high standard can mean increased clinical time when compared to providing and fitting porcelain veneers, meaning the benefit of no laboratory bill is lost.

One major problem, potentially overlooked when providing only one or two porcelain veneers, is the difficulty in accurately assessing colour, whether chroma, value or opacity, and this can easily become a nightmare for the cosmetic dentist.

You can learn how to create easy direct composite veneers in our free guide.

Remakes or visits by or to the technician can also make the restoration prohibitively expensive for the patient or dentist. Not withstanding this, how many times does the practitioner try-in the porcelain veneer with or without try-in pastes only to find that on actual cementation the aesthetics are suboptimal? 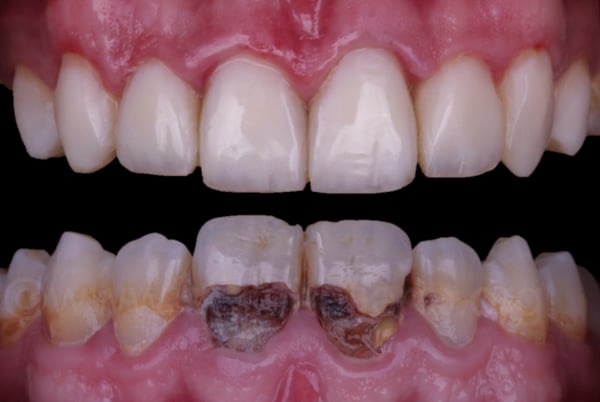 Before and after image courtesy of StyleItaliano Smile makeover with direct composite veneers case, click to read.

As with conventional composite veneers, repairs are easily made and it is a relatively simple and quick procedure to renew the outer layer with the Uveneer templates should there be any deterioration over time. 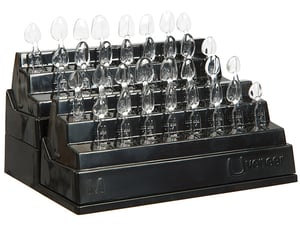 The Uveneer kit comprises a tiered box of autoclavable thermoplastic translucent templates of both upper and lower arches, including both anteriors and premolars. There are two sizes – large and universal (dependent on smile design proportions) – and these will cover most of the cases that a dentist will be faced with.

The templates are made of medical grade plastic and can be reused many times. The use of the Uveneer template system means that shiny, anatomically correct restorations are reproduced time after time both quickly and easily. The plastic templates have a special coating that does not adhere to composite resins or the bonding agents.

Obtaining an optimal aesthetic result using a single veneer can be extremely taxing to the clinician. With Uveneer, patients can see their tooth transformed in a matter of minutes. The following case illustrates how Uveneer allowed for a successful outcome in such a situation.

A 28-year-old woman attended, having just completed orthodontic treatment. A letter had been received from her orthodontist explaining that her upper right central incisor had been extruded as far as possible and suggested that a composite restoration be undertaken to improve her appearance.A metal chain retainer had been embedded in composite and placed palatally for retentive purposes.

The tooth was prepared for a veneer in the usual fashion. There is some debate as to whether to prepare a tooth before a veneer is placed. In this instance, the tooth was prepared to allow an increased area for bonding because of the roughed surface area produced. It was also done to ensure that the restoration was not too bulky or overcontoured.

Clear matrix strips were placed mesially and distally and the tooth was etched with 32% phosphoric acid gel.

The tooth was washed and dried and Futurabond U (Voco) was applied, which was subsequently cured. It is possible to omit the application of etching gel when using Futurabond U as it contains a self-etching component. However, with slightly increased bond strengths produced when using a separate etching stage, it was decided to carry out this additional step nevertheless.

Shade matching was then performed. After deciding upon the larger template for the upper right central incisor, the shades Amaris O1 and TN (translucent neutral) (Voco) were chosen.

A small amount of Amaris Flow HT (highly translucent) (Voco) was applied to the template. The eventual film thickness of this surface layer will be extremely thin and have negligible influence on the colour but this composite adds to the final gloss and may reduce the propensity for the formation of air blows.

Amaris TN was then placed onto this uncured gloss layer, which was spread over the surface of the template using a flat plastic instrument.

The dentine shade composite Amaris O1 was then applied to the tooth surface.

The Amaris O1 was then spread over the tooth surface with a flat plastic instrument.

The Uveneer template was then applied directly onto the tooth surface with matrices still in place.

The excess was removed before curing.

The template was then removed.

The tooth finished with a fine flamed diamond finishing bur with care taken to avoid touching the facial surface of the restoration.

Interdental finishing strips were applied interdentally, which was more difficult in this case because of the palatally placed metal chain retainer. An extremely natural looking restoration was achieved, and worthy of note was the natural incisal translucency.

If any modifications are required this is a relatively simple procedure. The facial surface of the restoration is cut back and the bond applied to the surface of the tooth before reapplying the template with the desired composite.

Fortunately, this was not necessary. Excellent results are often achieved using only one composite given the gloss produced, but to achieve the subtleties of a natural looking tooth a layered approach is advised.

As with any restorative procedure, clinicians can decide whether they use rubber dam or retraction cords and modify the technique as they wish.

Dentists, like so many professions, are almost conditioned into practising a technique without actually assessing what they are doing or what products or materials they are using.

It is the author’s belief that rather than a short-term solution, Uveneers can provide a definitive alternative to porcelain veneers and, in some cases, even supersede their use.

You can learn more about veneers with Ultradent and the Uveneer kits available from Optident.