The Data Behind Dentists' Bad Posture

Positioning yourself correctly when operating on a patient is more important than you think. This blog highlights the consequences of bad posture and the data behind it.

It is well known that dentists, hygienists and, to some extent, support staff suffer from bad backs.

The problem can start at dental school where students often don’t work with a trained nurse and the equipment is standardised in its layout in the clinic. This can in turn leads to a mindset of designing surgeries around the room and equipment rather than around the human body and its natural movements.

Poor posture and bad habits will account for about 65% of all dental workers in the UK suffering from some form of musculo-skeletal disorder in their lifetime.

So what are the implications of poor posture? The Wesleyan Assurance Society has published data, which makes shocking reading for the dental profession.

How Many Dentists Claim Financial Benefit?

The data is based on a population of 5,570 dentists who received financial benefit from their income protection plan held with Wesleyan Assurance Society. It includes an analysis of claims that ended between January 2002 and May 2012 (inclusive). The earliest recorded start date for a claim in the population was 6 December 1975.

This analysis intentionally does not distinguish between male and female dentists. Income protection benefit is generally paid when a dentist is incapacitated and unable to perform their role as a dentist.

At what age did dentists start to receive income protection benefit? 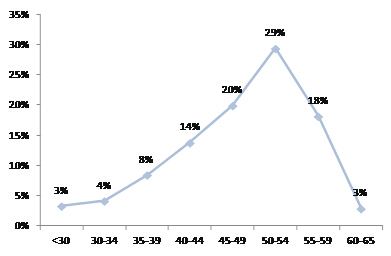 How long are benefits paid for claims overall?

From this, the vast majority (86%) of dentists receive income protection benefits for less than 12 months. Most people therefore do recover from incapacity and are fit enough to return to work within 12 months. However, the data is slightly skewed by the fact that some types of protection cover that pay benefits for a maximum period of 12 months are included. So in some cases, benefits may have stopped but the dentist continued to be incapacitated.

If the population as a whole is considered, income protection benefits are paid for a year and three months on average.

What were the most common recorded causes of incapacity?

The ‘other’ category is comprised of conditions that, on their own, would comprise perhaps 1-2% of the total population, so these tend not to isolate this into separate categories. They also include combinations of conditions that a dentist may report from the seven other categories.

Looking beyond the ‘other’ category, around two thirds of all claims can be filed under seven generic classifications. Musculoskeletal is by far the most clearly defined recorded cause of incapacity, accounting for over one in four claims.

At what age did dentists start to receive income protection benefit when musculoskeletal is the recorded cause of incapacity?

Only 5% of dentists under age 40 start to receive benefits when the cause of incapacity is recorded as musculoskeletal. As can be seen, this rises rapidly when dentists reach their forties and through their fifties.

How long are benefits paid when musculoskeletal is the cause of incapacity? 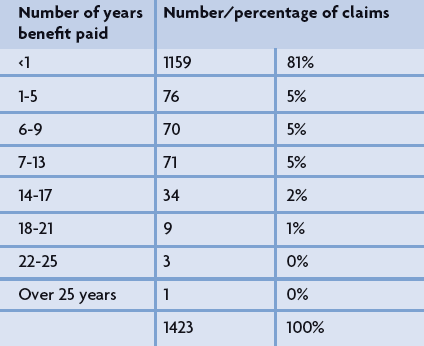 This is a stark warning for all dental workers as MSD will be a temporary halt for some, but for others it will be permanent.

How To Combat Musculoskeletal Incapacity In Dentists

While there are many ways to combat musculoskeletal incapacity available for dentists and dental professionals, the most common option is dental loupes.

Back to work with the Optident Essentials

7 Steps To Sell More Tooth Whitening In Your Practice