Louis Mackenzie provides the first of a two-part update on light curing. 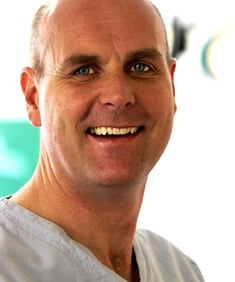 Louis Mackenzie is a GDP working in Birmingham and is a clinical lecturer at the University of Birmingham School of dentistry and in the postgraduate department at King’s college London.

He delivers lectures nationally and internationally on direct and indirect restorative techniques, minimally invasive dentistry and clinical photography and runs a series of popular hands-on courses.

He is a member of the editorial board of Dental Update journal, is the head of clinical training at SimplyHealth Professionals and is academic lead of the University of Birmingham’s Master’s programme in Restorative Dentistry.

Light curing is an integral component of contemporary adhesive restorative dentistry. Worldwide it is estimated that over half a billion visible light curing procedures are carried out annually.1

The importance of using high quality equipment and precise clinical techniques is often underestimated and numerous studies have reported that suboptimal light curing is a common occurrence, and may result in a range of significant disadvantages.(See Table 1)

The idea of using visible light curing in dentistry is credited to an ICI chemist while receiving a tooth-coloured direct restoration in the mid-1970s. ICI adapted their new technology for curing acrylic car paint and the leader of the research team volunteered to receive the first ever light cured composite restoration on 24th February 1976 (it was still present 25 years later!).

LED technology has largely replaced the use of filtered halogen lamps and most light curing handpieces are now cordless and rechargeable.2 It is recommended that a new LED LCU should have an output of ≥1000mW/cm² and that the use of budget, unapproved or even fake lights should be strictly avoided.3 Unfortunately it is widely documented that one third of LCUs have an output below the 300-400mW/cm² required to polymerise a 1.5-2.0mm increment of composite resin.1

Most LED units have a very narrow spectral emission, which must be optimised to activate camphoroquinone, the most commonly used photo initiator, at wavelength ~468nm. Where resin composite materials are formulated with photo initiators requiring shorter wavelengths (e.g. 410nm), recently introduced ‘polywave’ units are recommended, which have two or more LED colours. 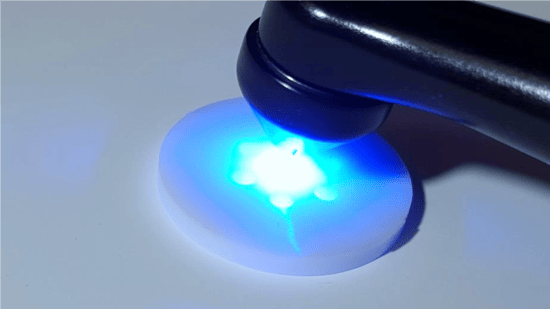 Although pulps are reported to be able to withstand a 5.5°-11° temperature rise, testing has only been done on young, healthy teeth. The effect on deep cavities and heavily restored/caries-damaged teeth has yet to be determined.1

Temperature rise may be reduced by directing a stream of air across the restorative surface, using a triple air syringe or aspirator tip. Small fibre-optic light guides are recommended because irradiance declines greatly as tip size increases.3 For ‘one-shot’ light curing the active diameter of the tip must be greater than the widest part of the restoration and low-profile light guides are recommended for improved access posteriorly. If the light guide is too small, it should be carefully moved around.

LCUs should have audible timers and/or visual displays as exposure time is a critical determinant of curing depth (along with light output and the composition, translucency and shade of the material being polymerised).

Lighter and translucent shades generally result in an increased depth of cure, however some very light or ‘bleach’ shades may contain alternative photo initiators.

Various regimes have been proposed for light curing (e.g. soft start, ramp and pulse) but the clinical significance of these protocols is questionable and may not be practical or may have limited effect on polymerisation shrinkage and therefore stress.

As it is impossible (and dangerous) to monitor the performance of LCUs visually; portable or inbuilt radiometers must be used. Although they cannot be relied upon to give accurate irradiance values they are useful for measuring the output of a new unit and for recording changes over time.1,3 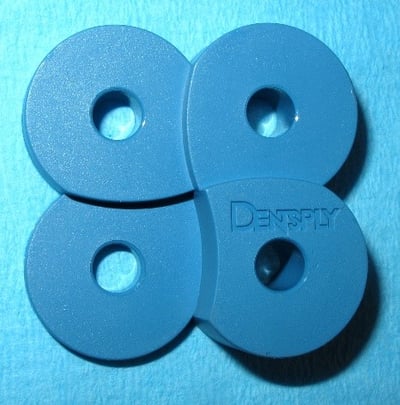 Depth of cure can also be estimated using ‘scrape testers’, where different shades of composite may be light cured at a range of thicknesses (e.g. 2.0, 4.0, 6.0 and 8.0mm pictured right). Following polymerisation, the tester is inverted to allow the hardness of deeper layers to be assessed with a suitable instrument.

It is important to cure from a clinically realistic distance (e.g. 8-10mm), rather than the zero mm often used in laboratory tests. Manufacturers are required to publish the power, beam profile and the effect of distance on irradiance of their LCUs.

Having described selection criteria for light curing equipment, part two will provide an update on optimising clinical techniques, including decontamination, maintenance and the hazards relating to light curing.

*The average life-span of a posterior composite restoration is less than six years, with secondary caries being the most common mode of failure.1 Failure is commonly tracked to the cervical margin of class II proximal boxes, where initial composite increments are furthest from the light and where shadowing is common.1